Stacey Bryant tags a giant 182+ after missing in SE Oklahoma 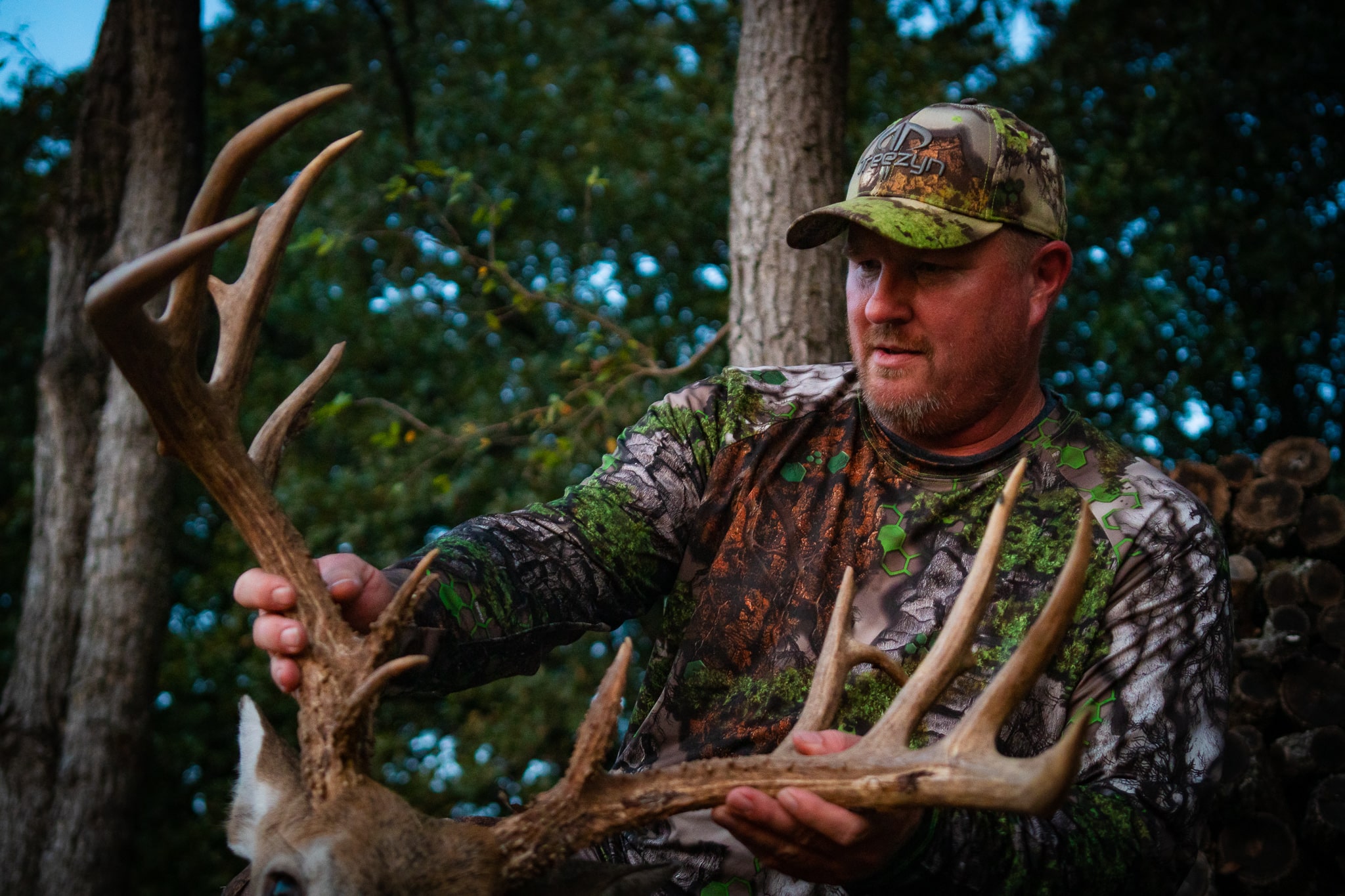 Stacey Bryant tags a giant 182+ after missing in SE Oklahoma

Oklahoma Bowhunter Stacey Bryant spent this summer as many outdoorsman do: getting ready for the 2021-2022 archery season. Having just secured a small tract of land to hunt, Stacey took the time he had left before season to scout it. After grueling hours in the timber He came across a promising location on a travel corridor near what seemed to be a bedding area with a large amount of mature buck sign.

Stacey put out a One and Done Feeder and Buck Seduction, and waited to see what type of deer the timber was holding. Almost immediately he began to see a high volume of deer traffic on camera, so He knew he was on to something good. It paid off mightily for him when he began getting Tactacam Photos of a stud on small tract of land he had just acquired.

Adapting to the Wild

After several weeks of feeding in the area Stacey began to have issues with Feral hogs. As any outdoorsman knows, hogs can cause an unreal amount of havoc. This was definitely the case for Stacey. Hogs had overrun his feeders & Protein. This is an obvious issue. Not only does the presence of hogs discourage deer movement in the area, it also takes a huge bite out of the feeding program set up for these deer.

Much to his surprise, the big Non-Typical made his appearance that night after installing the fence.

An interesting Turn of Events

As the season approaches, Stacey sits in great anticipation. He cannot wait to lay eyes on this buck in person. As he's sharing this info with Hunting partner and Friend Michael Harrell, Mike makes a wild discovery.

Upon studying the trail camera pics, Mike realizes that he recognizes this buck from previous seasons! They look over photos of this buck for some time and determine that this is the same buck that had been hunted by Mike and both of his children on one of his properties the previous 3 years. Within the last year, this buck had seemed to disappear from Mike's heard and Mike was unsure why.

This makes sense as they examine the photos. The new property area that this buck is now roaming located over a mile away from the area where Mike had been getting pictures all these years leading up to this.

His antler growth this year has also been astronomical, showing huge amount of growth compared to his photos for last year.

Excited at the thought of harvesting a beautiful animal like this, Stacey patiently waits for the Oklahoma Bow season opener.

On Saturday Oct. 2nd, armed with his Obsession Bow and a phone full of Evening Tactacam Photos, he sneaks into his blind and waits for the sun to sink low.

Deer begin to move, and Stacey sees quite a bit of action. Several does and a nice younger buck make their way through the travel corridor, stopping to hid this feeding area on the way. He knows that his target buck is in the area, so he holds off and sits quietly. Finally he spots movement in the timber. After some time he notices movement. The big bodied animal makes his way slowly through the timber until reaching the edge of the tree-line.

Finally, Stacey gets to lay eyes on the buck he has been looking for.

He takes his time watching the buck. The buck is not alert, as he is simply moving uninterrupted along his natural feeding pattern. Stacey wants to wait for the right shot, unblocked by any other animals, fence posts, etc.

After some time, the deer presents its-self broad side to stacey. He draws back, settles the pin, and lets the arrow fly.

I'm sure you can imagine his dismay when he realizes that the arrow had actually clipped his hunting blind, and hit the ground about 14 inches in front of the giant buck.

Stacey watches as his target buck lunges out of the fence, and back into the timber. He says that he sees him run quite a ways and then stop and continue feeding.

Stacey Took some time off from the woods, and waited until Wednesday night, OCT 6th. Back in the same blind where this all went down several night ago, scenarios run through his head as he waits on the sun to fall. Ever since he shot at this buck, the Tactacam Cell Cameras have shown him coming in at last light in the evenings. He knows that if it's going to happen, it's going to happen quick.

Finally, with only a few minutes of shooting light left, the buck enters the field. He feeds around for some time before presenting Stacey with a shot. Finally after a few minutes, he steps left and presents stacey with what seems to be a nice quartering away shot.

After reviewing the shot, and finding blood, He feels that perhaps he was more quartered away than he previously realized. After finding remnants of the guts, Stacey decides to back out and give the buck the night to pass.

The next morning He tracked briefly, but cut it short to leave for his daughters Softball tournament.

He called Mike, and explained the situation. Mike, knowing the shot might be iffy, decided to call Jaren Andrews to bring his tracking dog Chief to come look for this buck while stacey was away for the day.

After several hours of scouting, Mike locates the buck several hundred yards away from where he was shot.

Upon the tournament finishing, Stacey heads to mikes house where he will finally get to put his hands on the buck that he has been losing sleep over all this time!